Coca for cocaine is the world’s biggest illegal cultivation crop, with an estimated yield of 80-100 billion dollar a year. The ideal climate for cultivating coca is in the Andean Mountains, at the moment in Peru, Colombia and Bolivia. To get 1 gram of cocaine, 400 grams of coca leaves is needed. Therefore, a relatively large amount of farming land is needed to produce cocaine. In order to grow coca, rainforests need to be cleared. In Colombia, which is the second most biodiverse country in the world, 171,000 ha was used to grow coca in 2017, which is at the cost of important ecosystems. Not solely the production of coca causes deforestation, also the destruction encourages that. When coca plantations are destroyed, coca farmers lose their income and are forced to relocate. For their new settlements new farming land is needed, which is at the cost of rain forests. 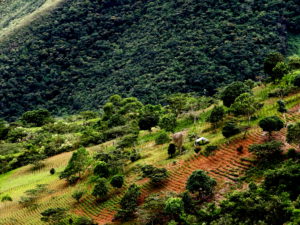